thank you for lemonade stand fundraiser

Here is a picture of the thank you notes we are still working on.  Megan wanted to have baseball fan bears for the notes.  We still have a lot to do, but wanted to share.  Megan was a 2011 New York Yankees HOPE Week honoree in 2011.  The New York Yankees gifted her with a special lemonade stand that now goes on the road for fundraising.  On June 23 the Staten Island Yankees hosted the stand at the Richmond County Ball Park and the lemonade stand raised over 4300 dollars for the Manresa Columbian Club.  The Manresa Columbian club is the home of the Manresa Knights of Columbus and the Columbiettes (2147).  Megan is a member of the Columbiettes and the Manresa Columbian club was devastated in Hurricane Sandy and had to be rebuilt in order to keep delivering charitable works and services to the neighborhood which was hit so hard.
Congratulations to the 2013 New York Yankees HOPE week honorees whom are being honored this week.  You truly are an inspiration to us all. 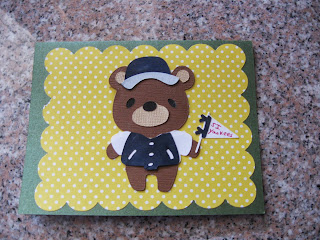 Posted by Meganscutecards at 11:50 AM